I have this terrible habit of expecting the worst out of a situation.  No matter what “they” say about happiness being a choice, I think pessimism is an incurable, chronic disease.

Specifically what I’m referring to at the moment is the way I envision a day alone with my children will be.

When I agreed to let Aaron take Jade and go away for the weekend to visit his brother and meet his brother’s new baby, I had a vision of a trio of gremlin-type, disobedient little hellions attacking me,  resulting in tears, me curled up in fetal position in the corner, a sleepless night and possibly a bald spot on my head from pulling my own hair out.  As determined as I am to be supportive of my husband’s hopes and dreams, the thought of being alone with my children always terrifies me.

So tonight when he called me to say he wouldn’t be leaving until early evening for his 4 hour drive home, I automatically went into panic mode.  This meant I’d have to entertain, feed, clean up, and put down (figuratively speaking) all 3 babies by myself for the 2nd day in a row.  I responded harshly in hopes that he’d get the picture and pack up the car.

What transpired immediately after hanging up the phone was the following:

Everest and Calder had just woken up from their nap.  Lochlan was still asleep.  The twins came downstairs together asking to play with trains, which I got out and placed on the table.  My 3-year-olds sat opposite each other at the kitchen table putting together their own strings of train track – one occasionally passing a piece to the other, saying, “Here you go.” – and sometimes quietly humming to themselves.  Eventually Lochlan woke up, I brought him downstairs and sat him in his highchair, and he contently watched his brothers play.

When dinner time came around, I said, “Boys, why don’t we go upstairs and watch a show for a little while so mommy can make dinner.”  They excitedly jumped up from their trains, shouting, “The hungry caterpillar show!” in unison.  I followed behind them holding the baby, turned on their favorite show of the day, and quietly slipped back downstairs without any objection from them.

I made dinner seamlessly, put it on the table, and called them down.  All 3 ate every bite that I put in front of them; even Lochlan who, lately, has been my pickiest eater.  Somehow they ate without spilling on the floor, the table, or themselves (it was taco soup so this was not only surprising but miraculous). 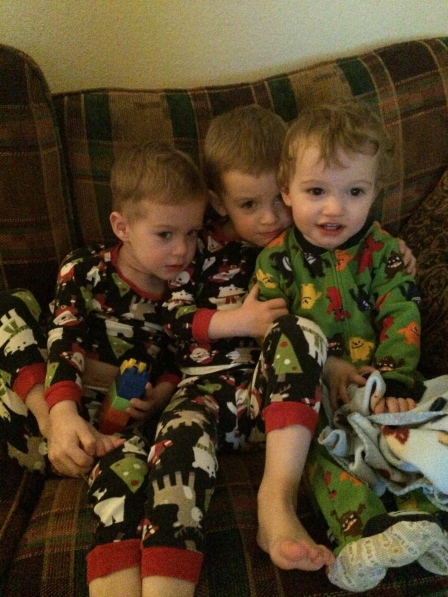 I’m not sure why I was so worked up today anyway, because this was what happened yesterday on DAY ONE of what I expected to be an Armageddon-type disaster:

-Everest and Calder played together throughout the day, occasionally including Lochlan and watching very little television.  I think I even played with them a little, and maybe even laughed a few times.

-We ate dinner quietly and cleanly (pasta without sauce) and retired upstairs where I turned on Despicable Me for the thousandth time this week.  Everest quoted most of it, complete with hand gestures and voice inflections.

-I gave all 3 boys a bath (I don’t know how clean they are because Lochlan stood up and peed in the water as soon as I set him down).

-The kids were all in bed by 7.  I came downstairs and worked on my online Transcription class.  I took a quiz at the end of the lesson and got 100%.

-After a thoroughly productive day, I took a shower, dried my hair, and then painted my toenails a beautiful shade of sparkly Valentine red as I watched Breaking Bad, season 1, episodes 1-3 (I’m a first timer who felt left out because my husband, mom, and sister are all obsessed with this show). 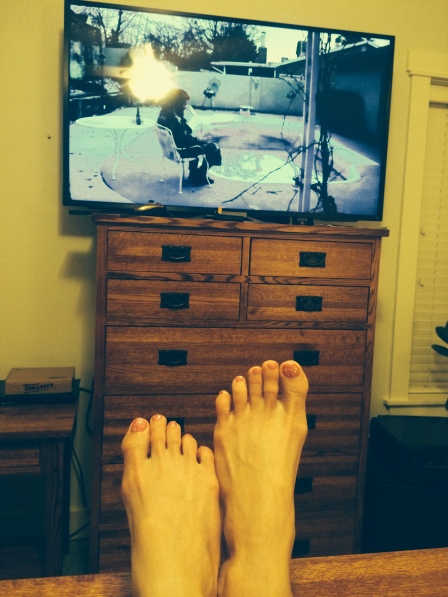 I’m honestly and truly jealous of how my own weekend went.

So in conclusion, I want to apologize to Aaron for over-dramatizing a situation that was so clearly NOT the end of the world and surprisingly so enjoyable that I’m actually hoping he’ll go away more often.  Okay, that’s not true.  But seriously, I CAN handle it.  I’m actually a very efficient and pleasant mom, and person in general, when I’m on my own.

Not to mention, watching the life of Walter White sure puts things in perspective.